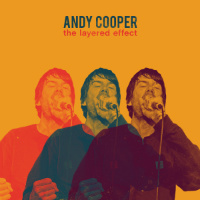 If you’ve been paying attention, Andy Cooper’s forthcoming new album, The Layered Effect is not completely surprising given the flurry of releases in the last two years. Indeed, after all these, another full length solo LP was surely the next – er – layer of the cake. Let’s face it, this sometime member of nineties/ noughties throwback boom-bap trio Ugly Duckling has undoubtedly been the most musically productive member of the Long Beach crew since their apparently indefinite musical hiatus began around seven years ago. While Einstein‘s name may occasionally pop up on a remix and Dizzy Dustin has devoted time to projects such as Grumpy Olde Men, Cooper has apparently been energised by the vacuum left by UD’s absence. The last two years have seen six solo seven inch singles, a free digital EP, multiple collaborations with Bristol breakbeat merchants The Allergies and Djar One and a solo twelve inch. Not only that, but the last of these is the only one which contains material appearing on The Layered Effect which means…that you’re getting a massive slew of yet more new material.

If you appreciated the sample-centric beat-crafting and intelligently playful mic manipulation of UD, Cooper’s your man. As almost all of his solo work has demonstrated, he is a devotee of hip-hop as originally envisaged and The Layered Effect is his most effective tribute to the roots of the music yet. Of course this isn’t just about Cooper being an emcee, for while obviously that, he has also demonstrated both his production and crate-digging chops in providing an LP that isn’t constructed (even this many years past the golden era) of over-used loops. More than this, and as the title suggests, The Layered Effect isn’t just about finding a good loop or two but instead using multiple strata of ‘found-sounds’ a la Prince Paul.

And so to the tracks themselves which beatwise often, though not always, veer between the De La funky and the Gang Starr jazzy. Opener and recent 12″ single Here Comes Another One represents the latter, bouncing along on a double-bass line with alternating jazz piano, muted trumpets and big horns motifs. It provides a backdrop over which Cooper can trade rhymes with Dutch MC Blabbermouf (who does a turn that recalls Alchemist in his Whooliganz days) about, well, basically rhymin’ and stealin’ – as a certain NY trio once had it.

But if the tempo on the album is often upbeat and party-oriented, that certainly isn’t always the case. Last Of A Dying Breed is a bitter-sweet examination of being into sampled breaks and rhymes long past when these were cutting edge – not to mention long after your peers are well into the parent zone – and its ‘when we were kings’ vibe is well-matched by a wistful organ loop. Later Cooper returns to the same theme, though with tongue more firmly in cheek, on B-Boy Blues. One of the LP’s many highlights, this relates the story of an aging homie over a beat that is suitably uptempo (but not too uptempo, obviously) – “Take it to the mat/ 360 degrees/ speedy on the down-rock/ ice on the freeze/ But now that era of life has ended/ Rolling on the ground ain’t recommended.”

And just to show that old doesn’t mean slow, Cooper spars with kindred spirit and fellow old-timer Abdominal on Anything Goes where both lay down devastating cross-generational lessons in double-speed rhyming and breath control. If the spectre of a Jurassic 5 comparison is raised by the ‘Red hot’ call-and-response outro to Sizzling Hot, the clattery drum-break and busier production mean that the similarity pretty much ends right there. Cooper leaves another highlight until nearly the end in the form of future live favourite Rick Said So, an 808 drums and guitar riff-drenched Run DMC/ Beasties pastiche which is juxtaposed with the upliftingly-entitled closer that is also the most progressive cut production-wise with its staccato beat – A New Dawn. The Layered Effect then, because doing things original hip-hop fashion never goes out of style.

The album will get a full vinyl release on Rocafort Records and the drop will be accompanied by a 30-minute mix of the album’s tracks. Expect some versions of the tracks on the mix to demonstrating even more ‘stealin’ (in the rhymin’ and stealin’ sense, you understand) than those on the album itself. AC will also be touring the LP across Europe in the New Year period – tour dates below players.
(Out 26 January on Rocafort Records)

Posted on 29th December 2017 no comments