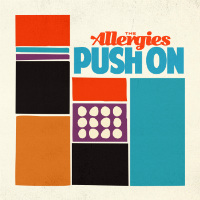 My word – is that The Allergies again? Airplay all over BBC radio, vinyl seven inch singles ago-go, a deepening collaboration with Ugly Duckling rapper Andy Cooper to the point that he’s almost the third member of the group and now here’s their second full-length album. What to call that bad boy though? Push Out? Nope – they do that in the morning. Push Back? Christ no! A phrase used by management and the porn industry – what are you on?! Ah – Push On – there we go – something that connotes advancing relentlessly and resiliently! Let’s have a track-by-track gander in an occasional style affectionately known at MB Towers as a ‘Byron’ after its creator.

1. INTRO
Jazz. Nice. A minute and twenty-one seconds of being musically fluffed by loops of Kenny Burrell or someone before the main action begins…

2. LOVE THAT I’M IN (feat. Andy Cooper)
…talking of which – here’s the dope-ass first single inna Indeep stylee in the first of multiple hook-ups between the boys and Cooper. There’s not a problem they can’t fix…

3. SINCE YOU’VE BEEN GONE
Nifty sampling from old soul gem Take Me Baby. Definitely not the Althea Spencer version but interesting to see the one it is culled from was co-penned by legendary funk-soul brother Vernon Garrett. Boom.

4. ENTITLED TO THAT
Talking of co-penning – you hear those lyrics? That’s the work of Andy Cooper, that is. Clearly not just a Long Beach rapping face since he’s half responsible for this nuclear neo-northern soul bomb.

5. GET DOWN ON YOU
Oh go on then – no harm in a slower tempo groover for early doors or the late hours. You gots to warms up the sneaks and rest tired feets, right?

6. PUSH ON
Precisely the sort of driving soul-infused uptempo beats for which The Allergies have become known…

8. HOLD YOU CLOSE
Go on then you saucy minxes but watch the laces yeah? I just put a new pair of fat ones in and soul-bangers like this are murder on the white!

9. BUZZSAW (feat. Andy Cooper)
Since Andy Cat is in the area it’d be rude not get him to slay the mic with one of those ridonkulous rapid-fire raps he does. “My rap is a buzzsaw”? He’s not kidding…

10. ALLERGIC INTERLUDE
…and since anyone would need a rest after that, here’s some chopped-up soul balm.

11. IT WON’T BE ME (feat. Andy Cooper)
I beg to differ Mr C, for here you most certainly are again in a number recalling your more melodic work both solo and with UD.

12. FUNKY FEELING
Ah yes – don’t worry. Funky feelings’ are all part and parcel of listening to The Allergies and no need to wait four weeks to see a GP. After a good hard boogie you’ll be right as rain.

13. REMEDY (feat. Dr Syntax)
Still not 100%? That’s because you’ve got the poison. Don’t worry, they’ve got the remedy. Dr Syntax finally gets a look-in on the mic. Presumably because Andy C was in the toilet or something.

14. GET ON THE FLOOR
It’s the end of your set, the crowd is amped, almost the whole place is jumping, you can only possibly turn it up one more notch. Play this.

COMMENTS: The Allergies do their thing once again, only more so! If you dug last year’s debut but felt a fair chunk of it was familiar from previous releases this is right up your alley since most of it won’t be familiar at all. A all-killer set that should set their already sharply rising musical career curve into a near vertical climb.

BEST TRACKS:
Love That I’m In, Since You’ve Been Gone, Entitled To That, Main Event, Buzzsaw