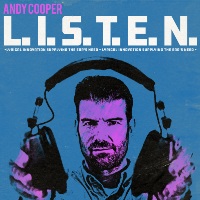 While Ugly Duckling’s last studio album Moving At Breakneck Speed might’ve dropped a whole nine years ago, band member and emcee Andy Cooper hasn’t slowed down for a moment since. Aside from being the official ‘unofficial third member’ of the crew on all The Allergies’ albums and a host of their singles, the last nine years have also seen him deliver two solo LPs, a solo mini-LP and five solo singles not to mention collaborations with DJ Format, Djar One and Baronski.  Now new long player L.I.S.T.E.N. (a.k.a. Lyrical Innovation Supplying The Ear’s Need) is here displaying another dose of inspired sampling and mic manipulation and, if anything, even more of a sense of a man utterly at home as a solo artist than its immediate predecessor.

As with that predecessor, The Layered Effect, the lion’s share of production on this release is down to…one Andy Cooper!  Yep, he’s not just the man on the mic and listening back to previous work after hearing the new LP, fans of both Ugly Duckling and The Allergies will be able to detect the hand of AC much more evidently in the work of both bands.  Having said that, a number of collaborators appear on this.  One of these is UD cohort DJ Young Einstein who co-produces on the mid-tempo self-affirmation boom-bap of Heart while The Allergies’ DJ Moneyshot repays numerous past favours with co-production credits on both previous single The Man, (funky, uptempo and featuring Cooper in speed-rap, party mode) as well as the antsy, b-boy-friendly Tension Release.  Although Cooper has explored a range of sound palettes on earlier solo drops, here, as with The Layered Effect, we’re once on Cooper’s home turf, a twist on the mid-point between early De La and classic Gang Starr – which our man exploits to great effect.  And yes, he’s aware it’s not the cutting edge of sonic experimantation – as the intro to opener Deluxe says, “Now, I’m pretty sure nobody cares/ This sound has been irrelevant for twenty-five years/ So why bother? Why persist?/ What’s the use in producing this?/ Well, I guessed I made the album for me.” In other words, this is about doing what you love doing, with a finesse that can only be achieved through a quarter century’s experience. Latest single L.I.S.T.E.N. is a case in point – a 75/ 150 bpm beast turning on a stuttering drum break, funk samples and the breakneck bars for which Cooper has made himself a name. Keep your ears also peeled for Fly Tonite (more funky boom-bap and the most UD-like of the material present) and the equally funky, lyrically uplifting closer Stand On Up. AC then, supplying the ears’ needs but (if they ever re-open) the dancefloor’s too.
(Out now (digital)/ Out 11 December (vinyl/ CD) on Unique Records)

Posted on 4th October 2020 no comments