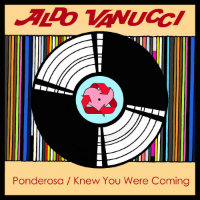 When he’s not flipping soul, supplying samples to Fatboy Slim, or undertaking epic dj sets for charity, there’s a fair bet that Plymouth’s 14th best DJ, Aldo Vanucci, is making his own music. Indeed there’s a veritable bonanza of it coming in the form of twelve track album Digging For A Living next month – the first track on which is Ponderosa and the first single off which is also Ponderosa. On the vinyl seven inch version this cut forms the A-side on which Vanucci wrangles spaghetti western soundtrack stylings, a fat drum break and vocalist Dena Deadly into a fine slab of breakbeat pop of the kind that used to be made by Gnarls Barkley. What do you pair with that? Some uptempo 80s boogie perhaps? I’ll get me castanets.
(Out now on Jalapeno Records)