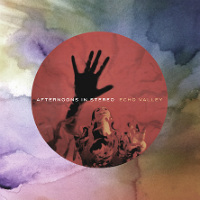 Afternoons In Stereo takes a trip down jazz canyon on sixth LP Echo Valley which fuses multiple genres with, well, jazz, obviously. The title track (and opener) is a beatless Rhodes piano mood piece that swiftly gives way to the crisp breakbeat intro of City Of The Future and its jazz fusion vistas. Eames In Dub by contrast juxtaposes spacey echoes with jazz disco beats while Redondo Beach joins the dots between blaxploitation and fusion guitar antics. The mescaline starts to kick in on the edge of the desert somewhere around Barstow – er – I mean on the fifth track, Chasing The Rising Sun with an atmospheric collision of folksy piccolo and swampy blues guitar and percussion, and after that Asteroid Field Guide goes jazz-Balearic, Matanzas goes jazz-bossa and The Argonaut imagines Curtis Mayfield getting down with the psych-jazz. Also, the fact that the one vocal cut is called the Meka Dub should leave you in no doubt as to where the jazz goes next.

That’s not quite every track but, I hear you ask, is no jazz-fusion stone left unturned? Yes, is the answer – this is Afternoons In Stereo after all – not John Zorn. Undoubtedly the daddy of all the tracks present however is King Of The Iron Coast. Is it the fact that it kicks off with a massive gong? Is it the fact that the rest of the intro consists of enough jungle tom-toms to herald the approach of a fifty foot high gorilla? No. It’s the fat break and dirty bass and horns that get launched at just over a minute into this seven minute monster. You want Miles-ish trumpets? You got them too. Spacey couple of minute long Mahavishnu Orchestra-ish bridge? That too. Nice.
(Out now on Timewarp Music)