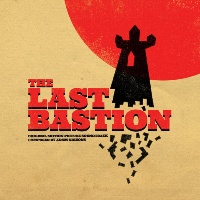 If your appetite for funky and monster guitar fuzz-fuelled soundtrack flavoured breaks and beats was whetted by Adam ‘Lack Of Afro’ Gibbons two six-track EPs, Manhunt and Here We Go, earlier in the year then you’ll be stoked to hear that the full twenty-two track album, The Last Bastion, from which the music on both EPs was drawn is now out. Inspired by the likes of John Barry and David Holmes, Gibbons had apparently always held a desire to make soundtrack music and the idea pre-dates his Lack Of Afro stuff. In the event though, it has been his LOA music that he’s hitherto spent his time focussed on and, despite the fact that this has been in high demand when it comes to film and TV sync deals, he hasn’t yet been offered a full OST to do. And so, since the mountain hadn’t come to Gibbons, he decided to do ‘a Holmes’ and make his own soundtrack to an imaginary film.

Said film’s title is Last Bastion which, it transpires is ‘a kind of utopian theme park promising eternal fulfilment’ and it is to here that four men travel, having sacked off their uninspiring regular lives. However, as the stylised black tower/ red sun cover, track titles like I Think He’s Dead and Anger Builds Inside Jordan (not to mention the music!) might suggest, things (we imagine, this film not actually existing, of course) seem to be rather more dystopian. Westworld anyone?

And so we travel from Here We Go‘s entry point of windmilling drum breaks, horns and guitar fuzz, through a rugged and inspiring landscape of much more guitar fuzz and huge outcrops of more funky drums occasionally broken up by great sweeping rivers of horns.  But do our heroes all survive?  The spaghetti western and gritty crime-funk vibes that pervade the LP invite favourable comparisons with early Calibro 35 material (which  bodes well for Gibbons’ soundtrack ambitions) but suggest the journey wasn’t as easy on the four imaginary adventurers as it is on the listener.  It is true that dreamy and somewhat melancholy horns begin the closing track which might suggest a downbeat ending but these soon give way to energetic drums and guitar fuzz once more.  Well – it is called Here We Go Again.  Sequel anyone?
(Out now HERE)