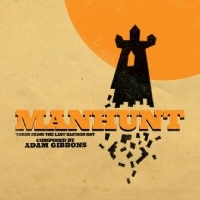 If you’ve been scouring the interweb for when the next instalment of Adam ‘Lack Of Afro’ Gibbons’ soundtrack-to-a-film-that-doesn’t-exist, your target is in the open – for the Manhunt EP is out now.  It follows The Here We Go EP and constitutes the second part of what will be the Last Bastion LP when it drops on red vinyl in the summer. Those who caught the first one will be pleased to hear that this release offers another dose of both fight scene scores, chase themes and mood pieces inspired by big soundtrack composers like John Barry and John Williams, 90s soundtrack-big beat crossover renegade David Holmes and as the monkey previously contended, legendary scorer of B-movie exotica film – Les Baxter. Manhunt is the funk-rock inflected opener, full of snarling guitars and crashing drum breaks, and while Bastion’s Revenge opens with a swirl of FX and then Mexican-style horns it soon wreaks jangling havoc. Get Rid Of Him goes the other way as guitar vamps descend into strings while Downstream may well be that point in the film when it looks like it al might be over for the hero. You can’t keep a good hero down though as the rekindled energy of Jordan’s Revenge and the ‘back in the game’ vibes of closer, Here We Go Again imply.  Even if the film industry is nosediving, it surely won’t be long before Netflix or Prime come knocking.
(Out now on Bastion Music Group)