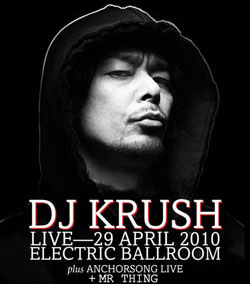 Ever watched the first (and only decent) Blade movie and wondered who did the minimal beats that fit so well with Wesley Snipes driving round round a moonlit city in a black Ford Mustang? Step up DJ Krush, a man who, along with DJ Shadow, was responsible for Mo Wax being such an entity in the mid nineties. Anyway, there’s a new LP on the way and Krush is dropping by the UK. COMPETITION CLOSED – congratulations Sam Compton!If you fancy winning free entry for yourself and a friend for his show at London’s Electric Ballroom (where he’ll be supported by Mr Thing & Anchorsong) on 29 April:
1. Riddle me this:
What is DJ Krush’s real name? (Shouldn’t be too hard to find out in a world with wikipedia in it.)
2. Email your answer and your name to monkeyboxing.editor@yahoo.com so that the ever-generous Soundcrash Music promoters can put you-plus-one the guestlist.

(PRESS RELEASE) The Sensei, aka DJ Krush returns to London for a rare solo show to throw down some of the heaviest beats and basslines known to mankind. With an exclusive preview of tracks from the eagerly-anticipated new LP (out late 2010), as well as a chance to catch one of the most gifted humans alive doing what he does best, this is a not-to-be-missed show for any fans of hip-hop, turntablism and progression!
Inspired way back by the seminal ‘Wild Styles’ movie Krush quickly embraced the burgeoning hip-hop culture, and before long was the first DJ to use turntables as a live instrument. He comes at you today as the battle hardened veteran of time-honoured dance floor killing shows across the globe. Expect a live turntablism display unlike anything you have seen before, following on from the acclaimed battle with his protege Kentaro back in October where he cemented his place on the top of the turntablist ladder.

MR THING started his high profile career as ‘the best one from the Scratch Perverts’! Not a bad start you’d think, however since his split with them he has gone on to become about the most respected hip hop DJ in the UK, working with BBE records, Youngun, Vadim, Roots Manuva and just about everyone else! Yes he still posesses the sublime turntable trickery that the ‘Pervs were all about but now, as a major lynchpin of the UK hip hop scene his sets are just as much about dropping the greatest block party anthems to excite trainspotters and the mainstream alike!
London-based Tokyo child Anchorsong makes great music! Plain and simple. Heavy, technical beats laden with synth-harmonies and moving chord-changes, all set to the beautiful sound (and sight in this case!) of his all-girl string-quartet, he came reccomended to us by DJ Krush and the high-accolade is easily matched by his pure, raw talent.

Posted on 28th February 2010 no comments