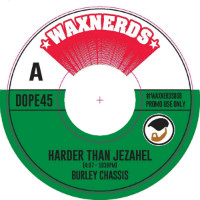 Deconstructing and rebuilding hip-hop tracks based on samples with extra use of the samples but also using the rapapellas and the sample source vocals? It’s what Waxnerds do. Don’t call it an edit! On their latest 45 to hit the streets – it’s all about the mighty P.E.’s Harder Than You Think‘s collision with the equally mighty Shirley Bassey’s Jezahel on Harder Than Jezahel. Well, I say ‘all about,’ we don’t want to ignore Mob Fire on the flip which, yes, re-introduces Peanut Butter Wolf’s Mobbin’ to Burly Chassis’s version of Light My Fire. And what do you say to those? That’s right, you do say ‘boom!’ And quite possibly ‘bap’ as well. All together now – so get up, just like that!
(Out now on Waxnerds HERE)