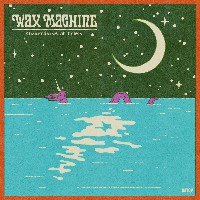 The rise of the new psychedelia continues with a new single from Wax Machine – Guardians Of Eden. The brain child of Lau Ro (born in Brazil, raised in Italy and the UK), the track draws from sixties West Coast fare as well as tropicalia and – with those vocals done tremolo style like Donovan on Hurdy Gurdy Man – a bit of sixties UK folk psych as well. Check the band image that accompanies this and you’ll see a bunch of fresh young things who have apparently stepped straight off the Haight Ashbury in 1969, appropriately enough since if this cut doesn’t make you strip off all your clothes and offer free love to the neighbours while saying hello to the flowers emerging this month in your garden, I don’t know what will. If you dig it, the even better news is that an album Hermit’s Grove is out at the start of July. Far out!
(Out now on Batov Records)