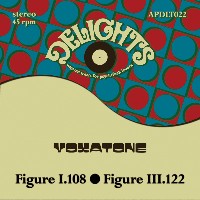 The mind can only boggle at the kind of conversations that must have been going on at Delights Mansions around this release – the label’s final one of the year. The first bit is kind of understandable: Voxatone (a.k.a. Markey Funk and Shay Landa) gaze around at a studio filled to the rafters with retro synths and think, ‘Damn, a lot of this stuff has got ‘Vox’ in its name! I mean we got a 50s Univox keyboard, we got a 60s Vox Continental organ, we got an 80s Soviet Polivoks synth…hey – let’s make two cuts for a 45 that use them all – we could even rope in Misha Panilov and his Vox Phantom bass!’   Then there’s the bit where they really go for the jugular with the track names, oohh – I dunno – something that really catches the imagination and takes it to the outer reaches of the psych-iverse you know, like – er – Figure I.108 and Figure III.122. Puts one in mind of George Lucas’s snappily-titled sci-fi flick THX 1138. Actually come to think of it – that was pretty good – a bit like these two – the evocative synth-led psych-funk of Figure I.108 and the full-on, funky space-chase theme of Figure III.122. Ok – maybe they’ve converted me. Still, you can imagine the shouted conversations between punters and DJ down at the psych-funk night – ‘Oi mate, this one’s wicked – what’s it called?…What!?..Er – can you write that down mate?..Thanks…No! I wanted the name of the record mate!..What!?
(Out now on Delights Records)