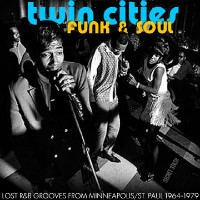 Many are the organising priniciples behind the funk and soul compilation – sub-genre, film tie-ins, as-sampled-bys, rarity, country of origin, gender of singer, you can pretty much name it, but my favourite – because it’s yielded most of my all-time favourites – is by U.S. city. The Soul Jazz label managed to pop out not one but three for New Orleans back in the day, as well as covering Miami and Chicago while Funky Delicacies popped out another slew, among them ones representing NY, Detroit and Houston. Some cities’ funk output has even done the rounds in several volumes on several labels – New Orleans being the primary example. The Minneapolis area however…not so much, though judging by the comparatively unknown (outside of collector circles) gems on Twin Cities Funk & Soul, it should have been. Actually, I’ll go further – on the basis of this release – it should be law that every major U.S. city research their funk and soul heritage and release the findings on vinyl.

Twin Cities Funk & Soul: Lost R&B Grooves From Minneapolis St Paul 1964-1979 (to give it its full moniker) is actually available on vinyl – if you look hard enough – but has probably sold out rather quickly at your usual stockist-of-choice places. As I discovered last night. Yep, I didn’t an early heads up on this one and despite living for projects like this – buying them, listening to them, writing about them and playing them out – I missed it. Check the preview audio below and feel my pain. Epic in content (as well as title length), it is a twenty-one track compilation arranged in broadly chronological order from rough-and-ready syncopated mid-sixties rnb and soul from the likes of The Valdons and Jackie Harris, through fatback funk (Willie & The Bumblebees) and on into seventies disco and soul. Actually though, the whole thing is worth the price alone just for Wanda Davis’s loose funk groove version of Save Me, Mojo Buford & His Chi 4’s hammond-soul stormer She’s Whole Lots Of Woman and Willie Walker’s soul burner I Ain’t Gonna Cheat On You No More. There’s something on here to get everyone to do it to it. Don’t sleep.
(Out now on Secret Stash Records)