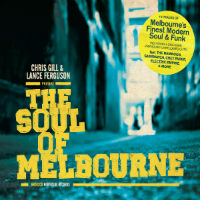 What’s Melbourne ever given the world? Well – apart from Olivia Newton John and Neighbours (cheers for them by the way) – actually quite a lot of contemporary funk and soul. MB regulars will know that while Brighton (UK) and the States seem to supply just under a quarter apiece of the planet’s entire output and just under another quarter seems to originate from a smattering of locations, more than a quarter seems to emanate from down under, in Melbourne. Of course it was only a matter of time before a high profile compilation of the world’s contemporary funk was assembled (that’ll be Craig Charles’ Freestyle Records compilation The Craig Charles Funk & Soul Club) but equally inevitable was that someone would assemble a collection of tracks from Melbourne’s funk and soul scene. And here it is – The Soul Of Melbourne.

It has to be said that this one’s been put together by two men who are fairly qualified to know what Melbourne funk and soul bands are all about. Chris Gill has signed a number of them to Northside Records while Lance Ferguson is in a few of them and produces even more – so yes, that does mean you’ll be finding stuff from The Bamboos, Cookin On 3 Burners and Kylie Auldist on here. You’ll also get (among the 18 tracks included) four never-before-released exclusives.

Anyway – enough of all that guff – the three most important questions are who’s on it? What are the best tracks? And is it coming out on vinyl? The vinyl’s easy – it’s a big fat ‘yes’ – but it’s limited and you’ll have to wait until December. Best cuts are easy too: Deep Street Soul‘s ‘core raw funk cover of The MC5’s Kick Out The Jams (a certified contemporary funk classic), the most funky cut off the last Bamboos LP – Kylie Auldist-featuring What I Know, The Mighty Showstoppers‘ Tighten Up-esque Hippy Skippy Moonstrut and the Bollywood spy-funk via Ennio Morricone Monkey Fight Snake from nutters The Bombay Royale. Oh and did I mention Clairy Brown & The Bangin Rackettes‘ sleazy, bluesy titty-shaker Love Letters, or Saskwatch‘s Don’t Wanna Try? or Kylie Auldist again (woman got growl!) with her late seventies soul style Changes?

Who else is on it? Full tracklist below. Melbourne has spoken – your call Brighton.
(Out 9 November and limited vinyl in early December on Northside Records)

Posted on 13th November 2012 no comments