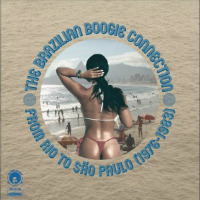 It’s not as if Brazil has ever needed any more sexing-up and yet one can only imagine what happened when the cocaine-fuelled pansexuality of disco fever hit the beaches and fleshpots of Rio and Sao Paolo at the tail end of the 70s. Well, I say imagine. You don’t have to imagine the music of course which is collected for you here in all its four-to-the-floor, Portuguese-voiced glory for the Cultures Of Soul label’s latest project. Hang on though – don’t some of these grooves sound a little familiar? Tarantulas’ Saiba Ser Feliz for example? Or Don’t Stop Til You Get Enough as it was known when a certain musical behemoth did it. Then there’s Marcos Valle’s Estrelar. Now where did I hear that before? Ah yes – sampled on Lateef & The Chief’s 2004 cut Don’t Stop. The Brazilian Boogie Connection is pretty much essential for lovers of disco, boogie and hip-hop producers who still indulge in sampling.
(Out 3 February on Cultures Of Soul)