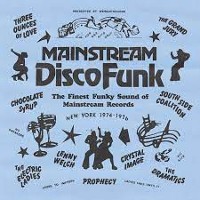 So that’s Mainstream Disco Funk as in ‘disco-funk music off Bob Shad’s NYC jazz label Mainstream Records’ as opposed to ‘disco-funk music that is mainstream in nature.’ Not that the cuts on this didn’t and couldn’t rock a dancefloor since they certainly could and certainly will. What this comp. on WeWantSounds aims to do however is shine a spotlight on the early days of disco when things were earthier and, well, funkier, before the mainstream and the cheese beckoned.  And if funkiness and earthiness are two of the qualities that set the twelve cuts collected here apart from later examples from planet disco, still another is the fact that these twelve all originally appeared on 45 – rather than the twelve inch platters that came to typify disco releases from the height through to the decline of the mirrorball era.

But back to Mr Shad who, having had his ear to the ground in the early 70s checking the sort of thing Salsoul, Scepter and Philadelphia International Records were starting to drop, put out a call to indy producers asking for their best cuts employing the new sound. In doing so, he managed to capture a transitional moment at which funk was morphing into disco, when the raw edges of the hitherto R&B and (secular) Gospel soul-influenced genre were being smoothed out and the dominance of polyrhythmic ‘second line parade’ style drum patterns was fading and paving the way for ‘four-to-the-floor’ to be king.

So you won’t be surprised to find that while the two versions (vocal and instrumental) of The Grand Jury’s Music Is Fun To Me have that spacey disco feel and the occasional synth effect, the tempo is somewhat slower than the sound of Studio 54, the break is syncopated and the whole thing is laced with chugging wah-wah guitar.  But while South Side Coalition’s Don’t You Wanna Get Down Get Down, also features resolutely blaxploitation-esque guitar, it has the uptempo speed of disco, more synth, and a vastly simpler drum pattern and lyrics. And so it goes – everything drawing partly from funk but experimenting with the sonic motifs that came to characterise disco.  Most conventionally disco-y of the set is arguably Three Ounces Of Love’s Disco Man Pt. 1 and 2 while the most conventionally funky is Prophecy’s What Ever’s Your Sign. As an interesting counterpoint to those two, consider also Lenny Welch’s A Hundred Pounds Of Pain (which offers about the clearest piece of evidence you can get as to why, some northern soulies back in the day eventually turned to disco) with its stylistic bridging of what is more Motown-type soul and disco than funk and disco. This is one compilation that’ll keep people happy both listening and dancing whichever side of the funk/disco divide the dwell on and especially if they inhabit both.
(Out 24 February on WeWantSounds)