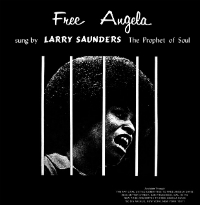 Civil rights issues, mass protest, racial injustice – the early 70s was a lot like now really – except perhaps that more people gave a shit back then. One thing of note between 1970 and 1972 was the arrest and incarceration of activist Angela Davis and the massive subsequent popular campaign to free her on the grounds that her imprisonment was unjust and purely political. Indeed as a card-carrying member of the American Communist Party with links to the Black Panthers she was removed from UCLA Department Of Philosophy on the orders of then Governor Of California, Ronald Reagan. Part of the campaign to free Angela was this fundraising LP – Free Angela – which was recently unearthed by Minneapolis label Secret Stash and just happens to be a repository of some superb funk and soul.

Originally released on Alexander Randolph’s Golden Triangle label it contains nine tracks. Despite the somewhat misleading title, Larry Saunders features on three of these (including the title track) – all of which showcase a falsetto to rival that of Curtis Mayfield and feature instrumentation from no less a group than the Muscle Shoals Rhythm Section. Whereas the soul on the Saunders tracks leans towards the thoughtful and tripped-out, it gets bluesy and righteous on Nitroglycerine’s contribution Old Uncle Tom Is Dead. Later, Brother Love bring out the organs and Judd Watkins’ Paradise is an impassioned slice of doo-wop. If you’re looking for something a little more uptempo – you’ll get that too. If anybody noticed the similarity between the music on Dickie Wonder’s soul burner Nobody Knows and The Velvelettes’ He Was Really Saying Something when it was recorded- they weren’t telling. Tyrone Thomas delivers a sassy northern soul cut Baby Can’t You See and the closer is Soul Encyclopedia’s bumpin Stax-ish funky soul groove Geraldine Jones. Did I mention that this album has soul?

Not a bad roll call for Angela Davis, then. In any case, anyone that pissed off Ronald Reagan off gets my vote. Soul power to the soul sista.
(Out 20 August on Secret Stash Records)