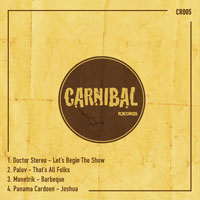 Moving at breakneck speed with their release schedule, Greek label Carnibal Records drop volume 5 today and it’s the best one in a while. Lest anyone should accuse them of being a one-trick pony, this time they leap the hedges of the Latin breaks enclosure in several different directions at once. Doctor Stereo canters along the road marked Young Einstein breakstrumentals while Palov opts for the bridleway to Cut Chemist style swing-beat instrumental from J5’s Quality Control LP, for example. So far so good, but then there’s Panama Cardoon himself. He’s clearly been on the jimson weed and skitters off on some madcap journey into sound which involves a hip-hop breakbeat rework of ‘negro spiritual’ Joshua Fought The Battle of Jericho – should result in some walls tumbling down. Rosette for best-in-show has to go to another hip-hop breaks rework – Monetrik’s inspired meddling with Wendy Rene’s early Stax soul cut Bar-B-Q – “I smell something in the air/ You know – smells like barbecue.” And we all know everyone loves a barbecue, right?
(Out now on Carnibal Records)