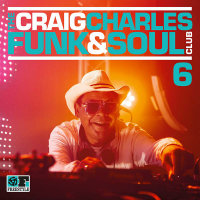 As much of an institution now as both his BBC Radio 6 Funk & Soul Show and the club night it is named after, Craig Charles’ annual Funk & Soul Club compilation series is up to Vol. 6 and if that isn’t an excuse to wear a cowboy hat when you’re djing, I don’t know what is. As usual, Mr Charles drives a mighty trail through the vast territory of contemporary funk and soul, rounding up prime examples of the genre along with a couple of rare groove classics.

The two oldies are the jazz-funky Foolish Girl from grizzled old scene veteran Brian Auger and his Oblivion Express featuring Alex Ligertwood and the sunny (but again highly jazz-funky) Evil Vibrations from The Mighty Ryeders. If you detect a generic relationship between those two, it’s but the tip of the jazz-funky iceberg in this volume which also includes Chip Wickham’s Rebel No 23, Courtney Pine’s Omar-featuring Rules, The New Mastersounds’ Tantalus and Menagerie’s closer Spiral. Every single one of these is trumped however by The Lewis Express’s chunky groover Brother Move. Of course, since this is a nineteen-track beast, there’s plenty of room for other strains of the greatest music known to man as well. Like Latin funk? Of course you do! Thus you’ll be pleased to hear that Orquesta Akokan make an appearance with the positively primal Mambo Rapidito while Mestizo Beat cover Mongo Santamaria’s Featherbed Lane though Grupo Magnetico’s take on Papa Was A Rolling Stone is the Latin daddy. Also standing out are The Bamboos’ shimmering Philly-soul style, Golden Ticket with Kylie Auldist on vox, Hammond funk burner Too Late from Matador! Soul Sounds (featuring New Mastersounds’ Eddie Roberts and Soulive’s Alan Evans) and The Bamboos’ Lance Ferguson with his Rare Groove Spectrum side project version of Googie Rene Combo‘s Smokey Joe’s La La. Craig Charles Funk & Soul Club Vol. 6 then – do I hear a ‘yee-ha’?

Posted on 12th December 2018 no comments