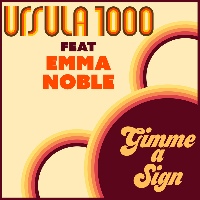 You can always rely on NYC’s Ursula 1000 for retro-futuristic sounds so it’s no surprise that Gimme A Sign kicks off with Latin boogaloo-style bongos and scorching Hammond keys. Our Ursula’s not one to confine himself to a single decade in his influences though so when a pumping nu-disco beat commences, adorned with synthwork, boogie and even Eastern influences, things morph into a right-old musical crossroads. Who to bestride such a nexus though? Ah – of course – Emma Noble! She of last year’s Emma Noble EP – itself a retro-tinged affair – famed for DJing, dancing on tables and a big afro. Yes, that should do it.
(Out now on Insect Queen Music)