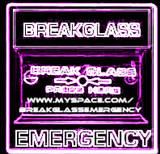 It’s 2009, nearly twenty years since dirty fuzzed-out rock from the Pacific Northwest broke big and plaid shirts are back in. I have no idea whether they own anything with checks on and they’re not from Seattle either but Glasgow’s Breakglass_Emergency certainly bring the noise. The monkey’s always had a soft spot for a bit of loud guitar and was as likely to listen to Soundgarden or The Screaming Trees as A Tribe Called Quest or 3rd Bass back in the day. Consequently, if you’re looking for scuzzy garage rock and some filthy riffs they’ll be your boys. This is what the band had to say for themselves:
Monkeyboxing (MB): Er…got any plaid shirts?
Breakglass_Emergency (BE): I wouldn’t be able to show my face if I didn’t have a plaid shirt – they don’t let you own a fuzz pedal without proof of ownership! That said, there’s a fine line between Seattle chic and Monty Python lumberjack. Just wait til it’s acceptable to wear sleeveless tour t-shirts again.
MB: How long have you guys been together – come to that how did the band get together?
BE: Ike – The Dirty8 – and myself were friends who wrote and jammed together – we were given the Shoz by a despot gypsy in exchange for our first born children such was the boy’s talent. Thankfully we had our fingers crossed when we made the deal. We’ve been together a year as a three piece.
MB: How important is that underscore in Breakglass Emergency?
BE: You wouldn’t believe me if I told you!
MB: America has The Black Keys, Australia had Wolfmother – why do you think there isn’t a comparable heavy blues/fuzz/garage rock scene in the UK (where all sizeable rock acts seem to be either metal or indie) when we’re the country that gave the world Cream, Zeppelin and Sabbath?
BE: Blues/fuzz/garage is like the bastard lovechild of British music – sure – people like it but it’s just not cool (see plaid shirts) the NME has so much say in what’s ‘cool’ among students/Britain’s ‘yoof’.’ The Ting Tings? Radio friendly pop – yes – but it’s not cool is it? Kings of Leon only became big-time when they got sexy haircuts! And it was the NME who created the Pete Doherty monster. Maybe the secret of success is this country is an ironic Topman-bought check shirt or a jauntily angled hat! And don’t start me on low-rise skinny jeans. If I wore skinny jeans I’d resemble a condom with a knot tied in the middle!
MB: Is Glasgow a hub of sweaty garage rock – or do you feel some other place is the true pulsing heart of dirty riffage in the UK?
BE: Glasgow has a great music scene – but too often you find yourself on the same bill as Franz Ferdinand/Libertines styled acts. But it’s like that everywhere in the UK. Maybe this recession will help strip the country of it’s twee, optimistic, shoegazing, chimey-guitared indie obsession. Rant over!
MB: What is the most rock n roll thing that has happened to the band?
BE: What happens with the band stays in the band. Unless it involves antibiotics and urethral swabs – in which case disclosure is needed. And a towel to bite on – obviously!
MB: The last word is yours – anything you want to get off your (hairy) chests?
BE:Come and listen to us! Whether you’re a critic (everybody’s a critic), a musician, a high ranking music executive with an under-spent budget, a Gibson CEO looking for someone to play their guitars, or, most importantly, someone who loves music. All we want to do is play music – preferably for people that want to listen. If you like us – tell a friend. And as for the last word – ‘wear your jeans loose and above pube height!’