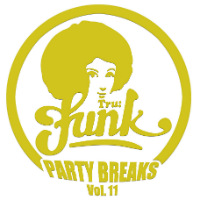 Oh hello – it’s the Tru Funk label with Party Breaks Vol. 11 in the second of today’s adventures in party breaks. And there was me thinking the label was ‘on a break’ – possibly permanently – due to being tired and emotional from too much party-breaking. Well – that and the fact that no-one has heard anything from them in over a year. Once again, reports of their demise seem to be bollocks though because here they jolly well are having assembled a crack team of breakbeat fiends for at least one more crack of the booty whip. Breakbeat Paradise label owner Badboe is first up and he pulls no punches with a vintage melding of Busta Rhymes and The Temptations which DJ Axe follows with one of the highlights of last year’s City Funk album a.k.a his Tower Of Power booty I Got The Chop. So far so funky breaks. The arrival of Chudy switches things up inna early 90s stylee however and you know that whatever party people are dancing to Where’s The Party At are going to be doing it in a black ripped vest, black cycling shorts and Timberland boots. Funk Fury returns to the twenty-first century with the Hispanic ghetto funk of Fresh and Freddy J wraps the whole joint up with the decidedly house-y Dance All Night. Cheers boys – so is there going to be a Vol. 12 or is that all she wrote?
(Out now on Tru:Funk)

Posted on 26th September 2017 no comments