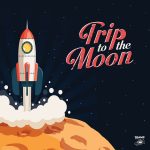 Tramp Records’ new compilation of lunar-themed nuggets, Trip To The Moon, was apparently inspired by the 2016-Nigerian-astronaut-stranded-in-space email scam. You know – the one about how a mission to rescue Abacha Tunde, stranded on a secret Russian space station since 1979, can only be organised by his cousin if some gullible – er – I mean helpful – foreigner will kindly transfer their bank details etc. etc. in return for which they will receive twenty per cent of Tunde’s $15 000 000 back pay of the last forty years. It was enough to make the Tramp crew’s hearts melt. Not to the extent of divulging private bank details or providing any actual cash you understand (so quite how this twelve tracker would help Mr Tunde isn’t entirely clear) but it’s the thought that counts, right?

As you’d expect from Tramp, you’ve probably never heard most of the nuggets contained on this but like a host of previous Tramp comps. we’re in orbit around the familiar territory of sixties RnB, soul and funk with a dash of psych-soul and garage rock thrown in – hell there’s even a brace of German-origin cuts on it – Hase Casar’s Wir Fliegen Weiter (Mondsong) and Orchestra Ambros Seelos’s Mondgesicht. As the label often do, they have released LP and cd versions with a slightly different track-order on each. The cd is also two tracks longer with the addition of the title track from Lucky Brown’s Space Dream album – the most recent cut on the comp. (though you wouldn’t realise it to listen to its swampy psych funk groove) and a second psychedelic number – Harmony Dawg’s Full Moon Child. Highlights common to both formats include the first two cuts – a pair of boogalaoo tittyshakers – The Swinging Astronauts’ Crazy Stockings On The Moon and La La Wilson Band’s raucous The Moon Man Is Back, Rev Jamal and Bob Johnson’s socially conscious critique of the Apollo project (the super funky Walking On The Moon (Men Are Starving)), the super lo-fi country funk of Sunny Man Kado’s Mars In 75 and finally the epic psych funk of Black Fox’s Voyage To The Moon. Trip To The Moon then – almost certainly a better destination for your green than the pocket of Abacha Tunde’s ‘cousin’.
(Out now on Tramp Records)