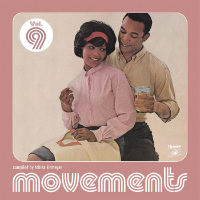 There’s no letting the grass grow under Tramp Records’ feet as they ensure that barely a month of the new year goes by before they unleash their first comp. in the form of Movements 9. As regular MB readers will known, Tramp’s raison d’etre is guardianship of rare and lost African American music from the sixties and seventies and this LP pulls another blinder by dropping eighteen tracks – only one of which only has seen a previous release elsewhere. As always – musical business is strictly chronological and this time it’s a game of three thirds.

First – it’s soul-jazz/ rnb time and this collection opens with a massive pair of little-known versions of well-known standards – Gee Gee King & Boogie Kings’ take on Fever and Connie Kaye Trio’s I’m A Woman. These are followed by Bus Brown’s sax-y Mr LBJ, Earl Demus Band’s storming uptempo version of Her Spare, the louche big band sauce of Chuck Finney Combo’s I Want A Man Like You and the section finishes with the Chick Willis’s torch song Sometimes Soon.

The laid-back soul of Australia’s Wide Awake marks the shift to funkier pastures and opens a middle section of largely syncopated seventies soul, though J.R.s Any Time Now arguably has a vibe more in line with the Willis cut. Joe Akens’ Nice is butter-smooth Mr Loverman-type soul, and Hummingbird 4 appear to be gently funking up Madame Butterfly with a song entitled Cho-Cho San. Evangeline Made’s Burnt Flesh alternates fusion-style guitar sections with pastel-shaded, soft-focus psychedelia and Dario & The Inferno get big with the horns on Brother Where Are You, while Swoop drop the mighty piccolo-led Upside Down and the hectic party noise of Mel-O-Madnezz’s What You Getting High On? precedes the short third ‘act.’

This last consists of a quartet of disco-era cuts that ensure the four is firmly to the floor. You’s You Got It is a latin-tinged number also characterised by synth licks, and Hot Cakes deliver a conga n sax-toting version of the Harlem Shuffle Theme. Which just leaves the dancefloor lady-magnet that is Reunions’ When The Well Runs Dry and an arguably even better Counts cut – the positively pumping Get Up Get Dancin.
(Out now on Tramp Records)

Posted on 11th February 2018 no comments