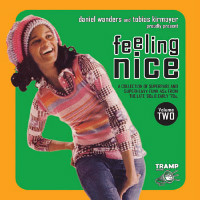 A new Tramp funky soul comp.? Feeling Nice Vol. 2 – chock full of superrare nuggets? We’ll just call it 5 stars yeah? Actually we won’t just do anything. Mainly because I wrote the press sheet for this back in the summer in which everything I could say about this release happily coincided with everything I wanted to say about this release – albeit with the kind of rhetorical flourish you’d expect from PR blah. Actually, I missed one thing out – the Lenis Guess opener’s a doozy. ‘Ave it – players below my blah:

“It’s like this – Tramp Records know vintage funk and soul. They know what you want to hear before you know you want to hear it. Hell, they even know what you want to hear before you even knew it existed. But in a world where the rediscovery of golden era ’60s and 70s funk and soul has been ongoing for the best part of a quarter of a century and the careers of contemporary bands reviving the sound has lasted longer than the careers of most of the original artists, how can this still be possible? What’s left that hasn’t already been repackaged, re-released, compiled and covered to within an inch of its life?

Try asking Tobias Kirmayer and Daniel Wanders. Two men with a burning itch for black music from back in the day that can’t be eased no matter how hard they scratch it. And scratch it they do. We’re not just talking about crate-digging via the normal channels either. Who knows what shady deals go down as they track and trace obscure copies of 45s hounding long forgotten artists and producers for single copies of limited run and private press seven inches? For Feeling Nice Volume 2 for example, they’ve unearthed releases that originally had less than 50 copies printed for radio demo purposes (The Soul Chargers’ Charge It Up Baby), a unlikely funk release from a Caribbean calypso label (Carole Veal’s Highway Of Love), a track that received no distribution whatsoever but was handed out as a free promo 45 to anyone who bought a set of Tama drums (!) (Johnny Apollo feat. Duffy Jackson Orchestra and their blistering cover of JB’s I Feel Good) and a super rare 45 called Barnyard Pimp recorded by Soul Explosion – a band of US servicemen based in Germany which was originally released on a Bavarian label some miles from Tramp Records’ present day HQ.

Don’t make the mistake of equating obscurity with less talent either. Charles Spurling who played guitar on and co-produced the Allen Matthews cut Allen’s Party worked with the mighty James Brown himself and recalls musical street duels with the Isley Brothers. The New Breed worked with Isaac Hayes and The Mar-Kays while singer Aalon Butler worked with The Animals’ Eric Burdon. In any case the music speaks for itself. You want big drum breaks? Check the opening bars of Nola & The Soul Rockers Reach Down And Get It. Squalling soul guitar? Try Filet Of Soul’s Do Your Own Thing. Fatback soul grooves? Aalon Butler’s Gettin Soul. It’s all there – 16 tracks of raw, vintage funk and soul then. Should leave you feeling pretty nice.”
(Out 21 October on Tramp Records)