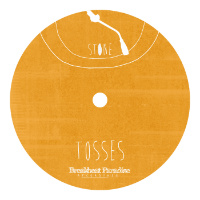 DJ/ Producer Tosses (of Tosses & Varvez fame) has released an EP called Stone. Tosses? Stone? You couldn’t make it up. Mind you, what else could you toss? Actually – the cleanest that line of discussion’s going to get is ‘not a dwarf’ so let’s not go there. And so it is that we focus on this four track set of funky breaks missiles. The first two are equal parts nasty synths, crunchy breaks and hip-hop hooks and the latter two get an added funk injection courtesy of the late great JB and the ‘lost’ great Sly Stone. The Junta-featuring closer is the clear winner though, based as it is around Larry Graham’s seminal bass-popping groove on Thank You Falettin Me Be Mice Elf Again.
(Out now on Breakbeat Paradise Recordings)

Posted on 11th November 2014 no comments