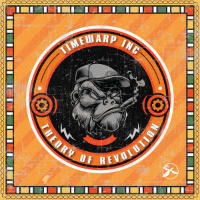 Theory Of Revolution?  Could use one of those in the UK since we’ve forgotten how to identify the corrupt, let alone do something about them. Maybe we should all boogie while everything burns down and if so, what better soundtrack than Timewarp Inc.’s fourth studio long-player? And what a mammoth affair Theory Of Revolution is, tipping the scales at a whopping nineteen tracks – yes, that is a double vinyl deal.  Furthermore, a sizeable number of the content consists of vocal cuts featuring Georges Perin (four times!), Jammaroots, Gobey and The Mage who make all make an appearance along with a host of guest musicians.

Stylistically, well over half the tracks are either some form of reggae or reggae-influenced, but you’ll also find nu-funky business (the Perin-featuring Realistic and I’ll Be Ok), Afro-nu-funky business (Afrofunk, obviously), exotic downtempo breaks (Smoke Miash (Santuri version)) and a trio of nu-disco cuts: Discogirls (Discofunk version), Yuil Disco Breaks (Soundsystem version) and Not Bad Disco.  You’ll find these non-reggae styles spaced fairly evenly among the reggae although all the vocal cuts bar one (of whatever  style) are loaded towards the start of the album.  The final vocal cut is a re-master of Afrofunk and as such can be found as part of a five-long string of updated versions and remixes of older tracks at the end of the LP.

Production and mastering, as always, is exemplary and done by Timewarp Inc. himself, Mr Angelos Stoumpos.  Among the best tracks you will find the languid nu-funk of the aforementioned Perin-featuring Realistic, the hip-hop skank of Economic Boom feat. The Mage, the Latin dancehall skank of Tropicaliente feat. Georges Perin, the aforementioned exotic downtempo bump Smoke Miash (Santuri version), another uptempo Latin-reggae instro Reggae On Dope, and the pulsing groove machine that is the aforementioned Yuil Disco Breaks.  Oh and every vinyl order comes with a free Funky Bob Timbales/ Cinemafilm vinyl 7″ , a free copy Timewarp Inc. CD Groovy Booty and a free Timewarp Music Sticker.  What are you waiting for?
(Out now on Timewarp Music HERE)

Posted on 8th January 2020 no comments