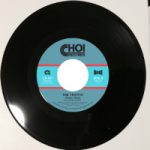 If you’ve been short of something to make your 45 sets harder, better, faster, stronger lately, The Traffic have got you covered with their latest – er – cover. Properly nailing that Daft Punk track in an organic funk stylee the band makes things drummier, funkier, slightly faster and all the better, doing for the French duo what they’ve previously done for the likes of Grandmaster Flash and Rick James. If that’s not enough for you from the ‘other’ band of Cookin’ On 3 Burners’ Ivan Khatchoyan, prepare yourself for the B-side original which is also the outfit’s first ever vocal cut, Chasin’ Feels. Loosely based on Dwele’s Feels So Good but once again in an organic funk stylee (and this time with afro touches) it features vocals by Thando and Francoistunes and skippily grooves all the way to the bank.
(Out now on Choi Records)