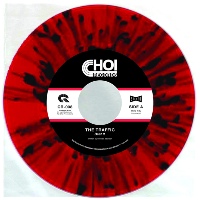 Further evidence (should it be needed) that The Traffic has more fun than one band should rightly be able to have in a recording session comes on either side of their new Beat It b/w Thriller 45. Yes, that’s right, the funk covers side-project of Cookin’ On 3 Burners drummer, Ivan Khatchoyan, delivers double treats from Michael Jackson’s early-80s creative zenith. Famed for organic instrumental funk versions of classic hip-hop and funk cuts, the band are especially cunning at finding creative substitutes for the missing vocalist and on Beat It the wah-wah guitar and flute all but sing. Not to be outdone by themselves, the band then practically conjure vocals from a sax for Thriller. Both covers match the original bpms pretty much exactly which means Beat It is right up there in b-boy territory and both are undoubtedly peak-time hand and roof raisers.
(Pre-order now HERE)