THE STILL BROTHERS: The Deep 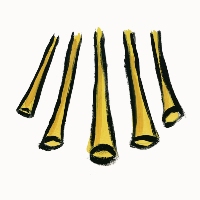 The Still Brothers’ The Deep has actually been out a couple of weeks already but, hey, even monkeys go on holiday sometimes. Turns out the ‘brothers’ are actually childhood friends Andrew LeCoche (of Ula Ruth) and Evan Heinze (of The Shacks) – two erstwhile rock(ish) band members who, it transpires, have a bit of a thing for instrumental breakbeat music. I say instrumental, this one does start almost immediately with samples of a subway preacher chastising his audience (which now includes you) for their transgressions, before lambasting them for adopting defeatist gestures. However, unlike the Bible-toting nutters it’s hard to avoid every time I visit the centre of town, LeCoche and Heinze take the vital step of underpinning the preaching with stirring piano chords and a fat drum break which goes a considerable way to making this a haranguing you are prepared to listen to. Once the horns kick in of course, you’re practically born again – and if it all seems over too soon when things fade to sax solo around the minute and a half mark, fear not for the track rises twenty-odd seconds later for its own Lazarus-like second burst of life.
(Out now on Lewis Recordings)