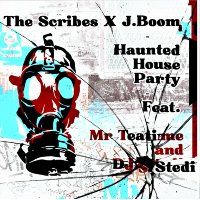 As we approach the anniversary of the start of lockdown, perhaps it is time to reflect on lockdown’s consequences for mental health. Obviously, having a govt. that kicked things off by ignoring best WHO pandemic advice because of a false political choice between the ‘people or the economy’ (not to mention ignoring the public health shortcomings identified in 2016’s Exercise Cygnus) was always going to result in harsher and longer lockdown measures than elsewhere. So if people have gone a little bit crazy as a result of restricted freedom of movement and lack of physical contact with others, it’s hardly surprising. Take The Scribes for example. The video to new single Haunted House Party finds rapper Ill Literate exploring the status quo over an eerie beat from Finnish producer, J-Boom, resulting in a floor-shaking performance to a crowd of – er – soft toys. If that’s not batshit enough for you, about two thirds of the way through, after a refreshing and invigorating swig of god-knows-what, Ill Literate is fleetingly replaced by gas-masked alter-ego Mr Teatime for eight bars. Upon his return, a toy panda promptly tears his throat out while Mr Teatime (who, it transpires, has gone nowhere at all) looks on and we all we learn something about how a fractured conscious might be the true cost of failing to hold people in power to account.