THE SCRIBES present: MR TEATIME And The End Of The World (2015) 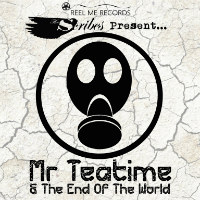 Apparently, The Scribes boys recently ‘received’ an email from the future (2074 to be precise) courtesy of one ‘Mr Teatime’ who has survived a nuclear holocaust which let’s face it, is a mixed blessing at best. Worse, ‘the machines’ have also survived and as – any viewer of The Matrix and Terminator series will tell, this never works out well for humans. Still, at least those humans had access to some shit-hot weaponry and vehicles. Less glamorously, Mr Teatime’s “new resistance lives in sewer systems” in a world which has a fair bit in common with the depressingly bleak post-holocaust existence of bowel-loosening 80s ‘docudrama’ Threads – as you discover in The Dust where our ironically Wonderland-ishly-named hero has had to survive on rats whilst enduring a week-long entombment under rubble. Happy days.

And what is the music like in 2074? Well, the insectoid beats of The Warning give way to the pounding sci-fi boom-bap of Dust, and the laboured, lurching tech-beats of The New World. The Sewers has the shuffling claustrophobic feel and eerie bleeps of something you might expect from a recent Roots Manuva effort while the uptempo filtered guitars and synths of the pounding Factory and the skittering near junglisms of The End ensure things stay ‘future’ all the way to the end. As for the lyrical content – well – it finds Shaun Amos – oops – I mean Mr Teatime, telling his story of course and as we’ve established, it’s rather cheerless. Still, there’s no arguing with the likes of, “Shit it’s a mutant/ Formerly human I guess by the clothes/ ‘cept no human I know has their organs exposed” to pique one’s interest. Anyway, it seems the mutants need a hero and Teatime is their man but is he up to the task? There’s only one way to find out, get your hazmat headphones on and wade in.
(Out now on Reel Me Records)

Posted on 27th December 2015 no comments