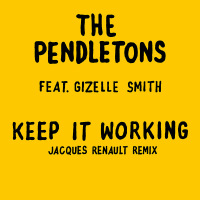 On the one hand, news that the Jacques Renault remix of The Pendletons’ Keep It Working is rather old – it’s been out nearly a month after all. On the other hand, if the PR comes out on the same day as the release that does tend to eliminate any lead time. So it’s just possibly you aren’t aware that New York disco commando Jacques Renault has taken the disco/ soul-jazz crossover Keep It Working from The Pendletons’ recent 2 Steps Away LP and re-worked it into a pneumatic disco beast of a track. The Pendletons are, of course Eric ‘E Da Boss’ Boss of Myron & E and producer Trailer Limon which is itself a hallmark of quality while the presence of additional vocals by UK soul diva Gizelle Smith will no doubt add that final sprinkling of disco dust for many.
(Out now on Bastard Jazz)

Posted on 19th November 2019 no comments