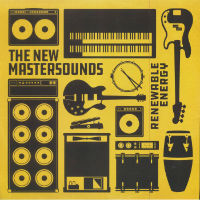 Sixteen years into their career, The New Mastersounds have spent nearly as long sounding like The Meters and Grant Green (in his funky period) as Grant Green and The Meters did. Combined. And that’s without Green’s drugs to help them along the way. It’s the kind of undertaking requiring an impressive amount of creative energy to keep things fresh, I think you’ll agree. Luckily, the band possess it, and the source appears to be renewable. It’s the sort of thing you could make an album name out of isn’t it? And what do you know – they have – for The New Mastersounds’ latest studio album is entitled Renewable Energy.

Of course, they don’t always sound a bit like Grant Green or The Meters. But then, of course, they never did. That’s just lazy, journalistic pigeonholing – not to mention a bit of gentle teasing. In fact hardly any tracks on this New Metersounds – oops, I mean Mastersounds LP can be said to have an obvious Meters/ NOLA influence apart from Chicago Girl, (ironically). However, a significant Blue Note-influenced camp (Tantalus, Pudding & Pie, Green Was Beautiful – obviously – Yokacoka, Hip City and Living That Jazz Life) makes up with the Green what is absent on the other front. There is also though a significant portion that fall into neither camp. The frantic Adryon De Leon-featuring Gonna Be Just Me is a case in point – obviously funky but Modeliste and Porter rhythm-powered it ain’t – more on a gritty acid-jazz tip. There’s also Stash, on which a beat-less psychedelic jazz intro rapidly picks up the sort of rhythm once the province of Herbie Hancock – a man whose influence is also detectable on the Blow Up-era sound of Groovin’ On The Groomers (though that does also include some very Grant-esque guitar) and jazzy, sax-led closer Swimming With My Fishies. Did I mention there’s a vocal cover of the James Gang’s Funk 49? No? Well there is and it’s one of the standouts along with Chicago Girl and Groovin’ On The Groomers.
(Out now on One Note Records)