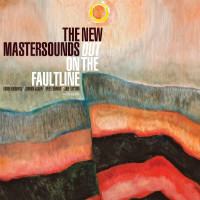 Some bands joke about being big in Japan but we all know everyone wants to be big in the USA. The New Mastersounds actually are quite big in the USA having managed to sell ‘coal to Newcastle’ or perhaps more accurately, ‘funk to New Orleans.’ No mean feat. The Yanks apparently can’t get enough of this Leeds-based UK act whose best party trick, when they’re in the mood, is Meters’ style grooves. Long-time fans will know these boys are also partial to a bit of Blue Note style jazz-funk jamming as well as afrobeat among the many funky sub-genres in which they display fairly effortless mastery. Also, last LP Breaks From The Border saw them add the odd bit of in-house vocals too. Expect to see all of the above represented on their eighth studio LP Out On The Faultline which drops at the start of November this year, on their own label One Note.

New touches for this LP include the Dr John style Welcome To NOLA with bayou-haunted vocals from Papa Mali whose larynx sounds like it’s gilded with splinters (in a good way) and the jazz-housey Summercamp. No. Really. Best cuts are the properly Augernized, swirly psychedelic funk of Turncoat, the aforementioned Welcome To NOLA and (as the band themselves well know) opener You Mess Me Up on which once more they become The New Metersounds.

I say as ‘they well know’ since the band have just dropped what they describe as their ‘first pop video’ for You Mess Me Up. It features all four members of the band diving into the sea, grabbing hold of their instruments and playing furiously with them. I’m no expert, but I’m fairly sure Freud would have had something to say about that. Stream of LP audio snippets below and video below that. Enjoy.

Check the vid below and stream the LP below that.
(Out 5 November on One Note)

One Response to THE NEW MASTERSOUNDS: ‘Out On The Faultline’ LP audio stream + ‘You Mess Me Up’ video (2012)