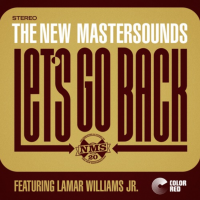 If the New Mastersounds go back anywhere on new single Let’s Go Back, it’s to the shores of a bayou in the early seventies, probably mid-afternoon and definitely in the sub-tropical heat of August. For a moment, an idling blues guitar suggests we’re dozing outside Tony Joe White’s favourite shack alongside an equally sleepy-looking ‘gator and then suddenly, with a sinuous flexing of bass and drums, we’re rumbling off into swamp-funk waters as a tale of relationship breakdown unfolds. Who better then than Lamar Williams Jr. to lend his yearning vocals to consideration of what to do about said relationship? Add in some horns and a fat drum breakdown and what other half could resist a sweaty bit of make-up sex? This is the lead single from the band’s Shake It LP due in September.
(Out now on Color Red Records)