THE MIGHTY MOCAMBOS: Golden Shadow / Preaching To The Choir (Vinyl 7″) 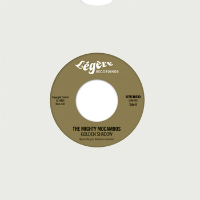 Here’s a very happy new year to you all from The Mighty Mocambos who greet 2020 in the correct way with new vinyl 7″ single Golden Shadow. Yes, I know, it’s a title that almost sounds rude, doesn’t it? And that’s not the only thing that’s rude about it for when you listen to said cut, it turns out to be a breakneck car chase theme style thingy on which horns and retro-synth try to outdo each other over windmilling drums. You can’t say fairer than that can you? Turns out the Mocambos can – they’ve only gone and put the fat-ass funk of LP standout cut Preaching To The Choir on the flip – a congregation booster, if ever there was one – don’t argue!
(Out now on Legere Recordings)