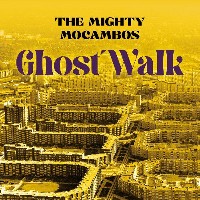 Want a taster of the forthcoming Scenarios album consisting entirely of live recordings from German funk heroes The Mighty Mocambos? Well, here it is – Ghost Walk. Nope, not a cover of the Budos Band nugget from 2006 but an entirely different cut with the same name. It says here that it’s, “kafka-esque funk instrumental, contrasting a jazzy breakbeat with spooky horns and organ erotica.” I could deconstruct that but it would take too long. The monkey’s going with, ‘it’s got a very brief Mancini-esque intro before resolving into precisely the uptempo crunchy drum underpinned funk we’ve come to expect over the years with both the horns and keys nodding in an Ethio-jazz sound direction. But then maybe ‘vaguely Ethio(-ish) funk’ perhaps doesn’t have the ring of ‘kafak-esque funk’ and ‘organ erotica,’ as a description. I wonder what would Franz say. What you don’t have to wonder is what anyone will say when they hear that this cut is live, which will obviously be – ‘Damn this lot are tight! I’ve heard many a studio recording that is shabbier.’
(Out now on Mocambo Records)

Posted on 30th September 2022 no comments