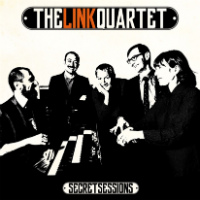 Seems like yonks ago that Hammond fiends The Link Quartet (now celebrating their quarter century!) last had anything out and a quick trawl of the interweb reveals that, actually it has been a couple of years, so a full length LP – in this case live recorded effort Secret Sessions – is long overdue. It does appear that these sessions are so secret that they’re – ahem – still keeping almost the whole thing under wraps even now despite a claimed (but presumably delayed) 31 May drop date. Fret not though, I can tell you that the tracklist includes a storming set of live favourites including La Moto and Tutto Cio Mi Basta from the band’s Quattro Pezzi Facili and that release is imminent or the monkey wouldn’t have been sent the PR blah. Check out appetite-whetting audio of the funky Black Bug and the fuzz n wah-wah guitar-augmented Fast Girls & Sexy Cars below.
(Out soon on Spinout Nuggets)