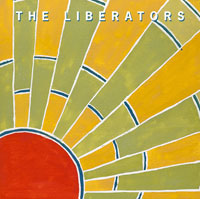 Record Kicks come through with a big release here in the shape of The Liberators who bring some serious afro-funk heat on their debut album The Liberators. I’m not quite sure who did the production on this but they’ve got down a pretty heavyweight sound. Consequently there’s a lot of rumble in the Liberators’ jungle – less ‘Shaft In Africa’ than ‘Shaft-right-here-in the-room-with-you. And that’s pretty much where the sound is at – full retro, Shaft-era blaxploitation instros augmented occasionally by guest vocals from ‘Foxy’ Roxie Ray, ‘Big’ Jojo Kuo and Afro ‘The Daddy’ Moses. Not ones to let pass an opportunity to promote their homage to the seventies, the band have also commissioned an epic blaxploitation style video. Clearly intended to out-‘Sabotage’ the Beastie Boys it contains every seventies cliché you can imagine and some that you’d forgotten about including fake taches, big afros, loose women, cheesy dialogue, head shots caused by a Magnum revolver and a really quite alarmingly snug pair of swim shorts. So epic is the video, in fact, that I wouldn’t be expecting anything else out of the Record Kicks stable for the rest of the year since it looks like they blew their 2011 budget on it. Check it below player. If you’re at all down with Big Pimp Jones, the Budos Band or Antibalas, this is one for you – no jive. Honky. I still reckon the band jacked the hook on Rags To Riches off The Look Of Love by eighties new romantic casualties ABC though…Full press guff below..

(PRESS RELEASE) Sydney-based new afro-funk formation THE LIBERATORS can certainly be said to be off to a smoldering start; with their debut gig taking place at Russ Dewbury’s famous Night At The Jazz Rooms, the liner notes of their debut album being written by Antibalas frontman Amayo (Daptone Records / Ropeadope / Afro-sound Records), and the patronage of DJs such as Gilles Peterson (BBC 1), this group can count on some serious support! Not only does this 10 piece outfit include members of Dojo Cuts among its division, but for their first full-length they also call on the vocal talents of guests such as Jojo Kuo (Fela Kuti / Daktaris / Antibalas), Roxie Ray (Dojo Cuts / Underbelly) and Ghanian-born Afro Moses. The result is an incredible set of new afrobeat tunes and funky jazz-dance grooves proving the masterful musicianship of this band. The self-titled debut effort by The Liberators is a solid example of the type of new afro-inspired funk that is rivaling the greatness of classics from 70s Africa. With a fierce array of super heavy guitars, percussion, and horns – all put together with a range of sounds that really portray the full spectrum of their style – The Liberators serve up some sizzling treats! From opening stormer “Multiculture”, to the kicking rhythm of “Rags To Riches”, the uplifting “Liberation” or the jazzy inflections of “Denga” featuring legendary drummer JoJo Kuo on vocals, this album is a tightly delivered assortment of funky afrobeat tunes with a jazz-dance flavor. Turn on your air-conditioning people, the heat is on!