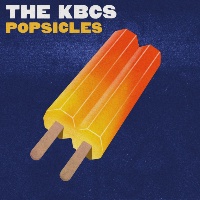 Psych-soul does rather seem to be the flavour of the month at the moment – whether vocal or instrumental – and it’s hard not to suspect that the wild success of Black Pumas may have driven a resurgence in music of this ilk. Enter The KBCS with Popsicles – the lead single off their forthcoming album Color Box. An upbeat instrumental driven by a funky rhythm and drenched in organ melodies, it is described by the band as “a late summer teenage adventure.” And the era evoked by such music is the one that exists between the rock n roll fifties of Stand By Me and the synth-drenched eighties of Stranger Things. Captured on camera at the time, it might exist now only as a hazy, washed-out polaroids of the 70s in northern Germany – albeit several decades before anyone in the band existed. Wait – northern Germany? Popsicles? Well – the crew are from Hamburg but ‘Popsicles’ does have more of a ring to it than ‘Eis am Stiel’, right? The full Color Box LP is due in November on the Sonar Kollektiv label.
(Out 6 August on Sonar Kollektiv)