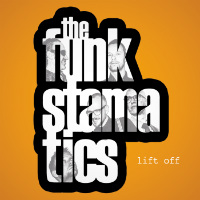 Ooh – what’s this? It’s systomatic, it’s hydromatic, it’s – funkstamatic…why it could be Dutch funk band Euro Cinema by a new name based on their previous (and second LP) Funkstamatic. Say hello to The Funkstamatics then – for such is indeed Euro Cinema’s new name and Lift Off is indeed their third LP. But why the new moniker? It surely couldn’t be because some Yank company has trademarked the name Euro Cinema? It could! Would you Adam and Eve it? Still, every cloud has a silver lining and arguably The Funkstamatics is a better name – but enough about that – how is the music on Lift Off?

Well, there’s certainly a bit of variety within Lift Off‘s ten-track confines. The guitar-heavy opener and title track kicks off with frantic drums and comes over like an uptempo Band Of Gypsys effort. EC Does It, in contrast, is a sax-y, stop-starty funk jam with a New Orleans vibe and is followed by Say It Part 1 – the first track to feature female vocalist Sanne Monster – and rocks a nu-funk vibe which is followed in turn by a rocket-powered cover of The Fabulous Counts’ Jan Jan. Oldie Scool gets a remake on Scool 2016 with its Blue Note-isms now heavily infused with garage-rock-isms and together with a break-heavy cover of Stevie’s Jesus Children Of America, it makes up the centre of the LP. Real Love is the next vocal cut – a disco-inflected bit of nu-funk and the closer is the sax n hammond funky Say It Part 2. Of course that’s only eight tracks because thus far unmentioned are the two best cuts on the album. These are Dikke Dinsdag which marries 60s Blue Note melodies with New Orleans-ish rhythms and the positively incendiary Punkfunk, a scorching organ and wah-wah guitars affair with so much 60s groove about it, it’s tantamount to a mod missile. Lift Off indeed.
(Out now on Funkstamatic Records)

One Response to THE FUNKSTAMATICS: Lift Off (2016)