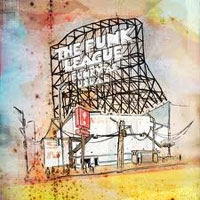 I think I might move to France. The food’s better, they don’t take any shit off the government and The Funk League are from there. Formerly The Incredible Funk League, DJ/producers Hugo and Soulbrother Suspect have latterly dropped the ‘incredible,’ in a not very hip-hop downplaying of their prowess. But don’t worry – it’s the only un-hip-hop thing about this pair. Aside from delivering an impressive array of funk and jazz-sourced boom-bap beats which occupy the middle ground between those of early Gang Starr, the first Wiseguys album and DJ Format they’ve also enlisted an equally dope array of emcees for rhyme duties on Funky As Usual. Check the line-up: an original member of the DITC collective (Diamond D), an original member of the Native Tongues collective (Sadat X), Large Professor of Main Source fame, Ugly Duckling’s Andy C, Quannum/ Blackalicious rapper Gift Of Gab, Abdominal (famous for his many collaborations with DJ Format, Swedish crew Speech Defect, Clyde Kingrap, and Supa.

Swedish wannabe ‘West Coast goof-rappers’ Speech Defect (rapping in American) get the funkiest, most party beat on former single Why You? although actually most of the rapper collabos on here are pretty uptempo b-boy ammunition. Should you have been there for the second or even first wave of the boom-bap however and are feeling your age a bit, why not kick back with Large Professor effort Through Good And Bad (there are two mixes to choose from) or put your slippers on and relax with Afrika Bambataa, Diamond D and Sadat X on The Boogie Down Bombers. Just don’t mistake understated flows with falling off – they’ve all still got game – as Diamond D puts it “Man, machine, damn I’m clean/ I make a quick getaway like your man McQueen”. The head nod vibe also runs through a number of smoky, hazy, jazzy instrumentals on the LP which practically get out the green and the rizla for you. In fact the only misstep on the entire thing is the inclusion of a ‘bonus’ cut of acoustic acid jazz performed by Favourite Recordings labelmates Joyous Juice with Kylie Auldist doing a very un-Auldist like vocal. Not quite sure what that’s doing on there – but to misquote Speech Defect, “Blue Note jazz, that’s class, acid jazz, that’s ass/ Why you put acid jazz on my shit?” Other than that we’re stone cold chillin’.
(Out 14 November on Favourite)

After a series of funk and jazz flavored singles and production credits for the likes of Large Professor or Diamond D, The Funk League, aka Hugo and the Soulbrother Suspect, is now ready to spread more groove with the release of a full length album this fall, “Funky As Usual”.

Both from the east side of Paris (20th district), rare groove connoisseurs and vinyl collectors, Hugo and Suspect would eventually meet half a decade ago at the later then-gig (with label mate and collaborator Cleon in the lineup), the “Soulbrothers Break Party”, an event where Paris top notch breakdancers and latin/funk listeners would gather round monthly during four years. Quickly, the two began trading records and gathering their best breaks to improve each other productions and DJ sets. They would ultimately record a few demos together, one emerging as their first single as The Funk League, “On & On”, featuring Bronx legend Sadat X from Brand Nubian, in 2009. The release featured some tight up-tempo rhythm as well as cold chilling boom bap tracks with swinging sleigh bells, establishing their sound identity, courtesy of that vintage and crispy SP1200 sound, analog equipment and precise turntable wizardry.

Still developing this formula, the League then released another EP, this time with Diamond D, Sadat and Andy C on the mic duties on some jazzy baselines and swinging drums, and a 7″ single with Swedish crew Speech Defect, showing skills on the deep funk tip. As Hugo and Suspect kept working together on a daily basis, it began clear than the collaboration would go beyond singles and EPs, and that it would give birth to a full length album.

“Funky As Usual” is this collection of grooves, covering that three year time span as if it was a single day – and night. A day in the life of two funksters, but also a blend of the duo’s favorite tunes and flows, put together with a precise production trademark (highlighting strong influences of Jazz, Fusion and even Brazilian music), and a subtle sequencing of the songs and interludes through the whole album, thus creating different atmospheric tones and patterns.

Same goes for the mic duties, handled by no less than Large Pro, Diamond, Sadat, Gift of Gab from Blackalicious, but also underground favorites Ugly Duckling, Abdominal, or even songstress Kylie Auldist from Aussie funk sensation, The Bamboos, on an all-acoustic acid jazz track performed and co-composed by label mates, The Joyous Juice.

As vintage sound doesn’t necessarily mean nostalgia, “Funky As Usual” appears as a 2011 update of those legacy sounds we continue to love, from modal jazz to deep funk to nowadays hip-hop or broken beats, holding down the groove traditions for now and beyond.