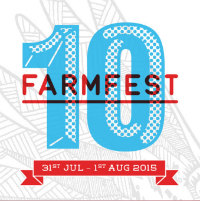 What’s this? Why it’s The Disablists premiering their Farmfest 10 Year Nostalgia Mix resulting from a celebratory flurry of hands to promote their appearance at the recent tenth annual Farmfest this year. Lest the words ‘flurry of hands’ in the same sentence as ‘Farmfest’ give anyone the wrong impression, let’s just clarify that The Disablists are ex-UK DMC champions and highly-skilled turntablists. I say ‘Disablists’ – this is actually the work of crew member Asian Hawk who gives the lie to his outfit’s name by providing a seamless and eclectic mix of hip-hop and electronica all picked from the last decade of the Farmfest line-up despite the handicap of having to include some house music.

Incidentally, aside from the Disablists, other acts of appeal to MB regulars at this year’s festival include The Gene Dudley Group and Wah Wah 45s’ Dom Servini. Cop tickets HERE; check the mix below.