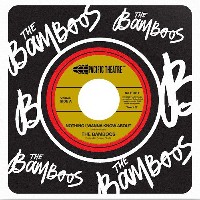 Just out from Aussie funk-soul heavyweights, The Bamboos, is their latest 45 featuring Hard Up LP track Nothing I Wanna Know About and new cut Bad Line. Expect crisp funk on the former which finds vocal powerhouse Kylie Auldist dropping an almost eighties-ish melody over a crunchy early seventies funk rhythm. Turn that lil puppy over and you’re confronted instead by the entirely different animal of the latter which has our Kylie belting it out on an early-to-mid-sixties-influenced stomper about the anguish of waiting on a ‘treat ’em mean to keep ’em keen’ type lover who keeps her ‘on hold’ either literally or metaphorically – or indeed, perhaps both. Great stuff either way, and, of course, on either side.
(Out now on Pacific Theatre)