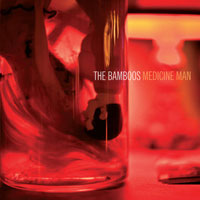 Once upon a time, The Bamboos were a largely instrumental retro-funk outfit. However, successive LPs have seen them inching steadily towards a more accessible sound by increasing their vocal numbers, expanding their generic repertoire beyond the boundaries of funk and become increasingly slick in the production department. Like furtive pop slags. Does fifth LP Medicine Man mark a return to channelling some raw-ass bayou-funk juju or is it all about big pharma now? Let’s have a gander:

WHERE DOES THE TIME GO? feat. Aloe Blacc
A good question. Wherever it went made this seem longer. A track bred for a single purpose: storming the pop charts and imprinting the name ‘The Bamboos’ on the mainstream consciousness. Smoother than a baby’s ass and ironically grating as a result. I need something less bland. Something less bland is what I need.

WHAT I KNOW
That’s more like it. A funky soul stomp featuring Kylie Auldist at her effortless raw soul best. Banger. That’s what I know.

I GOT BURNED feat. Tim Rogers
You’re not the only one Tim, you big time thief. Cocaine-era Claptonesque guitar? Hope you like seventies AOR with your soul.

THE WILHELM SCREAM feat. Megan Washington
The band cover James Blake in a super smooth seventies soul manner. Not bad. Will go down a storm with the Adele/ Amy middle-class parents’ crowd.

I NEVER feat. Daniel Merriweather
I never heard this guy sound anything but boy band. I bet this one’s lined up for chart action.

ELIZA feat. Megan Washington
Pop/ northern soul stomper – very nice – but production so clean you could eat your dinner out of its toilet bowl.

MEDICINE MAN
…as you can here – even if it is a bit moodier.

HELLO STRANGER
Hello yourself. You sound a bit like sitar funk meeting nineties shoe-gazer indie. And I like you. A lot.

WINDOW
If I was near one I’d fucking leap out of it. Adele didn’t write the tune and lyrics for this one but she might as well have done.

COMMENTS:
The Bamboos of yore are represented pretty much only by What I Know on this. God knows its hard enough for artists to make money these days so I can’t imagine anyone begrudging the band a stab at the big time but frankly if they get any more pop the next album will sound like Scissor Sisters. Nevertheless, Medicine Man is a solid effort that should garner much wider and well-deserved recognition and certainly gains them a VIP access to the lucrative coffee table market. No doubt that will ruffle a few feathers but if it has mainly mainstream-friendly tunes and it has slick mainstream production – it’s probably mainstream. Whether that’s a bad thing or not depends on your outlook. Personally I don’t have a problem with mainstream. Just coffee-table mainstream. And the sort of people who like coffee table mainstream. But as Gnarls Barkley, Plan B (in his Strickland Banks guise) and Aloe Blacc have shown – it doesn’t all have to end up in Adele hell.

One Response to THE BAMBOOS: Medicine Man (2012)