THE ALLERGIES: Say The Word 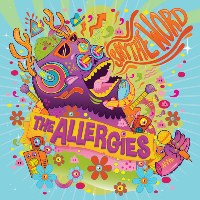 Good lord is it time to say some words about new Allergies LP – er – Say The Word already? It’s the fourth in as many years without so much as a pity break for the competition! They soared over that ‘difficult third’ LP hurdle like it wasn’t even there – mainly because they’ve been enjoying a near vertical career trajectory that has taken them from DJ-only gigs to full live-band performances and from the comfort of BBC Radio 6 to the dizzy heights of Radio 2 with the odd lucrative TV/ movie soundtrack sync along the way. And now here they are again – smugly clutching a new one wrapped in cartoon psychedelia and promising a cornucopia of sonic delights! Will it be the one to make a google search of ‘The Allergies’ take you to a Radio One A-list playlist rather than an archived page on immune responses though? Let’s have a look see…

1. HIT ME ONE TIME (feat. Andy Cooper)
No, no, you hit us boys! Preferably with dancefloor-ready boom-bap and – yes – ‘unofficial third Allergy’ Mr Andy Cooper….

3. SAY THE WORD (feat. Andy Cooper & Marietta Smith)
I certainly will and the word is d-o-p-e. All rhythmic stabs and evocations of Taste The Secret-era Ugly Duckling. I’ll have a ticket to Bangers-ville please driver – no – just a single! I’ll be staying there.

6. I JUST GOT THAT FEELING (feat. Andy Cooper)
One of the few chilled moments which, in this case, evokes another era of UD
– Audacity to be precise. Could UD MC Andy C be involved? Yes he could!

7. EVERY TRICK IN THE BOOK
Yet another former single and iteration of that classic Allergies party soul-stomp sound on which they work every trick in book to keep one’s feet-a-movin.’

8. GET YOURSELF SOME
Oh go on then – if you’re offering. Audience-friendly shouty hook over a funky-soul groove – what’s not to like?

9. RILE ‘EM UP (feat. Andy Cooper & Marietta Smith)
The flip to the Felony 45 and another lyrical dream team-up of Andy C’s party bars and a sung Smith hook.

11. I’M ON IT (feat. Dr Syntax & Skunkadelic)
…Dr Syntax and Skunkadelic to tag team it over an uptempo beat complete with an outer bongolian-style motif…

12. TAKE ME BACK (feat. Mr Woodnote)
…Allergies live band homie Mr Woodnote to make like the sax machine he is over another of this LP’s few more reflective moments…

13. IT FEELS SO GOOD (feat. Marietta Smith)
…and Marietta Smith to deliver a saucy finale to this party over a shimmying Latin-esque rhythm. Is that Andy C doing the ‘woos’ and other bits in the background? It is isn’t it? He loves it!

COMMENTS: Once again The Allergies give post-celebrity deejay hell a swerve by dropping their best LP yet – this is bubblegum party breaks for days. If you liked their previous stuff, you’ll love this – it’s them again but more so. Hurrah!

BEST TRACKS: Say The Word, Take My Love, I Just Got That Feeling, Every Trick In The Book, Get Yourself Some, Rile ‘Em Up, It Feels So Good