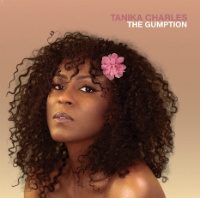 When Torontonian singer Tanika Charles blew in the a couple of years ago with debut LP Soul Run, she made big waves on the underground soul scene and catapulted herself onto a global stage. Ask most people and they’d tell you that label Record Kicks had unerringly struck gold once again. Which they obviously had – given the fuss. Sadly the monkey wasn’t feeling it. Fast forward to April this year however and Charles dropped a stone classic pair of cuts lifted from new album The Gumption by way of a lead single, A-side Love Overdue which channelled early sixties Sugar Pie DeSanto-style R&B and prime Northern Soul on flip in the form of Remember To Remember. Hurrah! But has she maintained the quality over a whole longer player? Let’s find out!

1. TELL ME SOMETHING
Hmm – curious choice of opener, one of the more reflective tracks on the album and if anything sounds like it could have been on the last one. Still maybe that was the point – a link of sorts…

LOVE OVERDUE
…or this dancefloor winner and massive nod to sixties R&B, rightly picked to appear on the first single…

REMEMBER TO REMEMBER
…or indeed this which formed the single’s B-side though and for the monkey’s money should have been the A-side or at the very least the AA side. The very definition of how to update northern soul for the twenty-first century and hands down the album highlight.

DANS LES NUAGES
…as is this wafty little beauty. All very appropriate given its title.

CADILLAC MOON
Time to get introspective again, get those brushes out for the snares and a suggestion of Erykah Badu. Presumably not an advert for the Detroit motor company’s latest mid-range people carrier…

FIRST & LAST
…probably a good idea to head back to the safety of something that sounds like it was helmed by Diana Ross in the seventies (because that beat’s too funky for sixties Motown!)

LOOK AT US NOW
a.k.a. let’s see what sixties soul sounds like through a nineties rnb filter. Not too bad as it goes.

SINCE YOU’VE BEEN GONE
More of a seventies feel here, slo-mo funky rhythms, piano and organ warmth and soaring lyrics…

ALWAYS RESTLESS
…and keeping with the seventies, the sort of beatless balladeering Stevie Wonder liked to knock out during his Talking Book era.

COMMENTS: Well, that’s thirty-eight minutes you’ll have absolutely no regrets devoting to Tanika Charles. I’d say Record Kicks have unerringly struck gold once again if that didn’t sound like the sort of thing that might have been said already some time ago by nearly everyone else. I’d also say that this will catapult Charles onto a global stage if – er – that hadn’t she hadn’t already achieved that. It will cement and extend her status though since The Gumption is more distinctive, more appealing and more varied than Soul Run and indeed a step up in every respect.