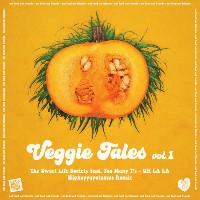 Sweet Life Society have just dropped new 45 Veggie Tales Vol. 1 featuring no fewer than three versions (vinyl-only original plus Hiphoppapotamus vocal and instro remixes) of their track Oh La La. It’s not to be confused with a certain classic Wiseguys cut with which it shares a very similar name of course, though they do share the fact that they are uptempo party breakbeat cuts with a large hip-hop influence.  Indeed, in the case of the remix, they also share a penchant for Latin-style samples as Hiphoppapotamus teams up all his favourites in a right on boogaloo sample riot.  Taking the mic for this 130 bpm affair, you’ve also got Too Many Ts, adding a healthy dose of lyrical positivity to the mix. Given all that, you might well ask why it’s called Veggie Tales Vol. 1 and not just Oh La La. I mean there’s a picture of a pumpkin on the cover and a tasty-sounding recipe for pasta with creamy pumpkin sauce on the cover but so what? Maybe it’s just the zest for life you get when you’re not eating animal hostilities man. Then again, the label are claiming an anthropomorphized pumpkin turned up asking to be on a record and that inspired them to spread veggie culture through the medium of recorded music. Whatever the truth – here’s a 7″ to get your teeth into!
(Out now on Little Beat More)