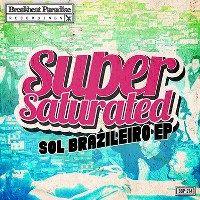 Cornish outfit Super Saturated drench the world in super disco breakin’ vibes on new EP Sol Brazileiro which certainly contains the sort of positivity you’d associate with Brazilian sun. The opening title track employs enough funky disco good time vibes to motivate dozing sunbathers on Rio’s Copacabana beach. This is followed by more of the same on Give You Up before the more muscular and even faster uptempo big beat of the aptly named Dancefloor Killer and finally, the jangling funk of closer Can’t Fight It by which time anyone between the actual Copacabana and New York club Copacabana who isn’t dead is probably on their feet.
(Out now on Breakbeat Paradise)

Posted on 29th November 2022 no comments