SUNNY & THE SUNLINERS: Get Down b/w Cross My Heart (Vinyl 7″) 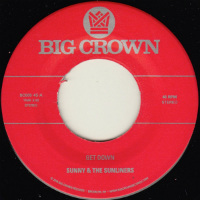 Big Crown continue their excellent work re-issuing the back catalogue of Sunny & The Sunliners by releasing what is arguably the band’s funkiest ever cut – their cover of Get Down – on 45. Another funk-collector’s holy grail, its only previous single release was on the label, Key Loc, set up by Sunny himself way back when and finds the band deliver fat seventies funk while Sunny cultivates his vocal rasp. On the flip, it’s first time on 45 for another cover – the band’s (arguably better) version of Billy Stewart torch song slowie Cross My Heart which may sound familiar because the Stewart version was recently sampled by Jay Electronica on Exhibit C.
(Out now on Big Crown)